At launch, Ashes of Creation is going to have a total of nine playable races. There are four parent races: Aela Humans, Dünzenkell Dwarves, Kaivek Orcs, Pyrian Elves; and each of these parent races have two subaces. Additionally, due to Kickstarter successful reaching the $2,500,000 mark, a ninth race was added: The Tulnar.

The Race Chart on the right gives some baseline information we have about the Parent Classes. For those people looking for more lore, you can check the Ashes of Creation community wiki for the scraps of lore that Steven has dropped over the years. Be forewarned though; lore is one of the things Steven is keeping under wraps. While many things need to be tested, there is no reason to give prior access to the lore.

The overall background story for the Parent Races is on the eve of extinction due to the calamity which spawned the corruption, the races were ushered through the Divine Gates to Sanctus. Unfortunately, not all of the population was able to make it through the divine gates before the corruption reached them. Many members of the Parent Races were stranded on Verra destined to die, if not for divine intervention. By the will of the Gods, pockets of the Underrealm were created that allowed those members of the parent races and members of the NPC minor races to survive.

Over the years of intermarriage and interbreeding, the Tulnar have lost most of the features representative of their parent races through constant intermingling between the races and have become a race of their own. From a game mechanic perspective, the Tulnar will be created during character creation by moving three sliders: Humanoid, Mammalian, Reptile. Unfortunately, at this time we have very little information about the Tulnar. While we have seen limited concept art for several of the races, we have been instructed to disregard the silhouetted Tulnar concept art from 2017. We will have to wait until we get actual concept art, or until Alpha 2 when we expect the Tulnar to be revealed.

To keep all the racial information properly sorted, only the information that affects all the races is detailed on this page. All race specific information is split out onto the sub-pages for the parent races which has sections for each of the subraces and then the page for the Tulnar. 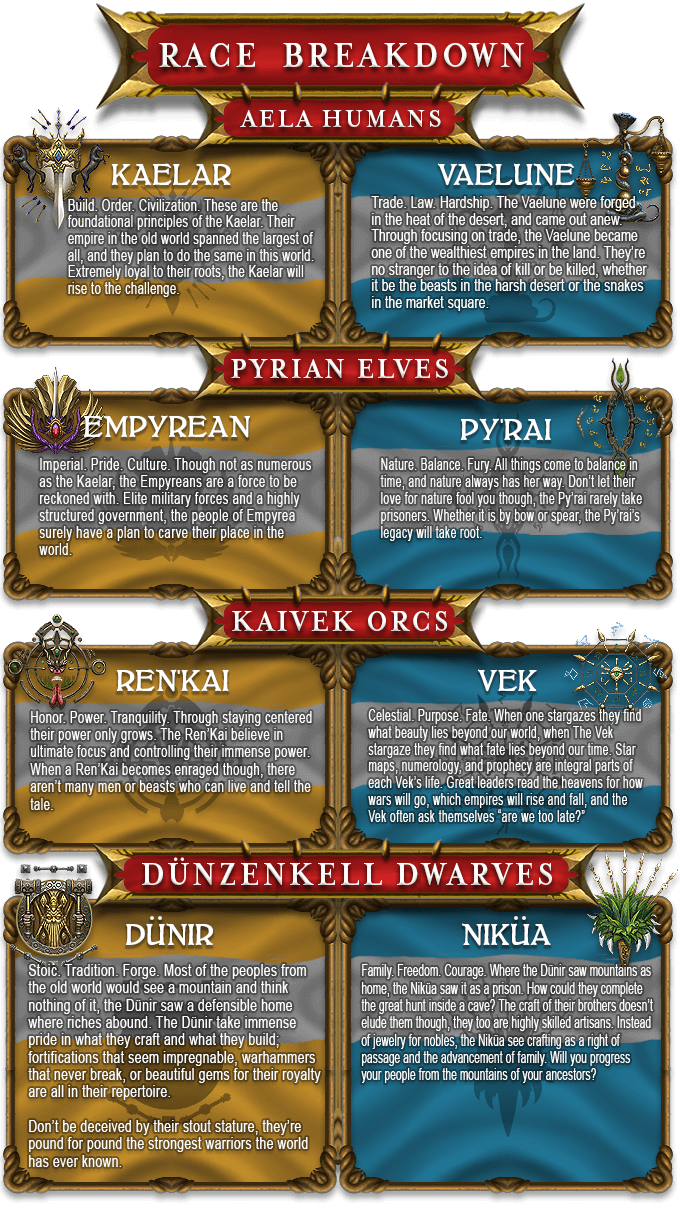 People are concerned if racial choice will matter in Ashes of Creation. The answer is absolutely! Races choice will matter. While there is no race locking for classes, race absolutely affects class performance due to the fact the race lays the baseline for a player’s stats. Does this mean all races will perform equally well at all classes. No. Given that different races have different baseline stats, race will play some part class performance. How large of a difference the different races play on end-game stats is unknown.

Additionally, the races have an influence on the architecture found in the different Nodes. For more on this check the Nodes page on Nodes Page.

As discussed in the Combat System Overview, augments are a change to the function of an ability not an actual new ability. Races will be providing racial augments. We do not have the racial augment list yet, nor do we know if each sub-race will get their own unique augments, or if the sub-races share augments based on shared parentage and only their cultures are different.

To keep all the augment information in the same place, augments are discussed in detail on the Combat System Overview Page.