Modern MMORPGs operate primarily on two types of Class Systems. The first is where you have a fixed class which cannot change, so whatever choice you make at character creation is the choice you live with throughout the character’s existence. You see this in games such as World of Warcraft or Blade and Soul. The second, is where you have a variable class option where you can change your class as needed to fit your current situation. You see this in games such as in Final Fantasy XI/XIV and Archeage.

We do not have a lot of information on the Archetypes, but we do have some limited snippets to help give characters insight into the system. Tanks are the only main-tanking Archetype. While someone classes can off-tank if they pick Tank as their Secondary, they will not be able to replace Tanks as the main-tank. The same is true for Clerics as the primary healer. While Bard does have some direct off-healing ability, the intention is for Clerics to be the main healer and Bards to be the off-healer and support. Additionally, when taking Cleric as a secondary Archetype, while you may gain some self-sustain augments, you will not be gaining any direct heal abilities.

Finally, the Summoner is supposedly able to fulfill any role in party play. We are not yet sure how this is going to work out; however, we do know they will accomplish this through the summons they conjure. 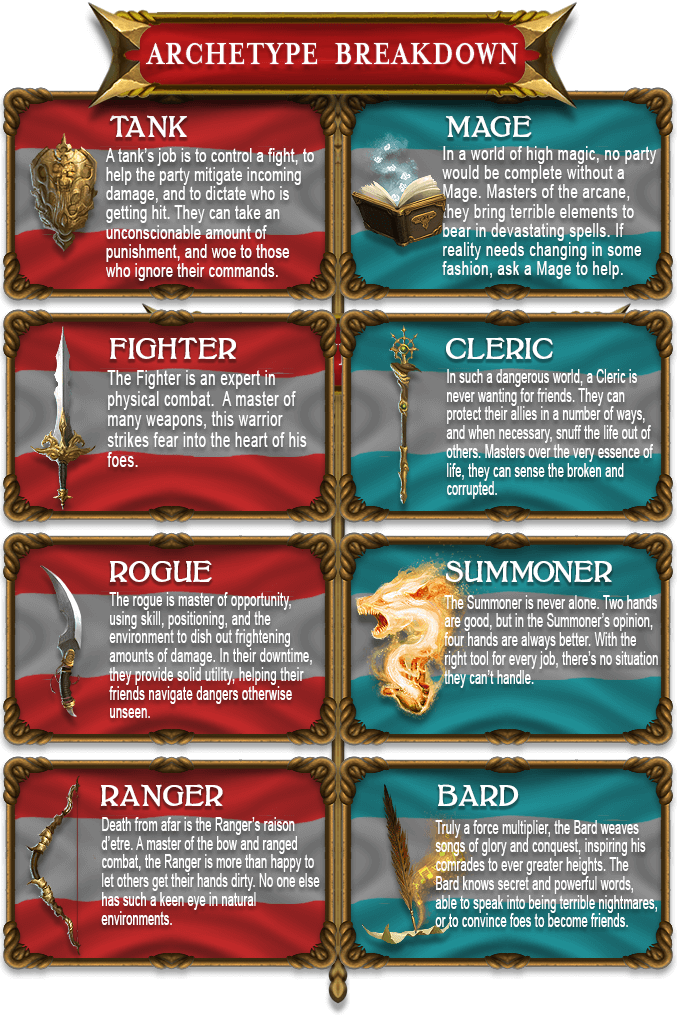 At character creation the player will have to choose one of the eight archetypes to be their primary archetype. This decision is permanent and final. There is no plan to allow players to change their primary Archetype, neither through game or through the cash shop.

As previously stated, the Primary Archetype dictates the role the character fills in party play: tank, healer, support, or damage dealer. Intrepid Studios has stated that game is going to follow a traditional Trinity System; however, here at Ashes 101 we disagree with this statement. The fact the Cleric and Bard Archetypes have been split into Main Healer and Off-Healer and Buffer breaks the traditional trinity. That said, it is up to the reader if they consider the game a traditional trinity or not.

Note: The staff at Intrepid Studios have a bad habit of using the terms Archetype and Class interchangeably. There will be some places in direct quotes where they are using the word class, when they are referring to Archetype and vice versa. When listening to a quote that uses the terms Archetype or Class, make sure to listen to the entire quote, including things said before or after to look for contextual clues for if they are using the word as intended or if they have accidentally used it interchangeably.

At level 25, players will have the option to choose a secondary Archetype. As stated, this does not grant the character access to the Secondary Archetypes abilities. Instead, this opens four schools of abilities augments that the player can modify their skills with. Augments are not just minor bonuses to abilities, instead they can function as major organic changes to the ability. Augments are detailed in the Combat System Overview section on Augments.

Reminder: Characters only receive abilities from their primary archetype (and weapons/armor). The secondary archetype only provides augments to the skills, not new skills.

At present time there is not a lot to be said about Classes. While some people have gone so far as to say Ashes of Creation only has 8 Classes with 8 different specs, I disagree with this assessment. While it is certainly true Ashes may turn out to feel this way; given that Augments are described as changing the organic nature of the abilities, we will have to reserve judgement until we can go hands-on with Class system.

We are not expecting to see Classes until Alpha 2. Alpha 1 is slated to cap at level 20 for character progression and with Secondary Archetypes locked until 25, they just will not be any way to unlock classes in Alpha 1 unless Intrepid raises the level cap.

At face value it seems like the entire class system might be a waste, given that you do not get any skills or abilities from your secondary class. It might appear that Intrepid would be better just doing the 8 base Archetypes and moving on from there. The key, is understanding how the secondary class provides access to a unique set of augments, actually four unique sets of augments, and how those augments change the base abilities. Augments are discussed in the Combat System Overview.

Unlike other games which put strict restrictions on the weapon and armor availability for each class, Ashes allows full choice when it comes to the weapon and armor selections per class. There are no hard limits: any class can wear any gear. Primary Archetypes have preferred armor and weapons though their passives, which will be a factor in deciding what armor and weapons you want to wear. For example, while it is possible for a Tank to use an Axe and Medium Armor, however, they will be giving up the benefits of their Heavy Armor passive which gives tanks extra armor and an extra health percentage boosts per piece of Heavy Armor they are wearing.

We also know that weapons will have their own progression paths much like the Primary Archetype skill tree. Weapons will have passives available in their skill trees that will increase the effectiveness of those weapons. We have very little other information on the weapon skill trees at this time. 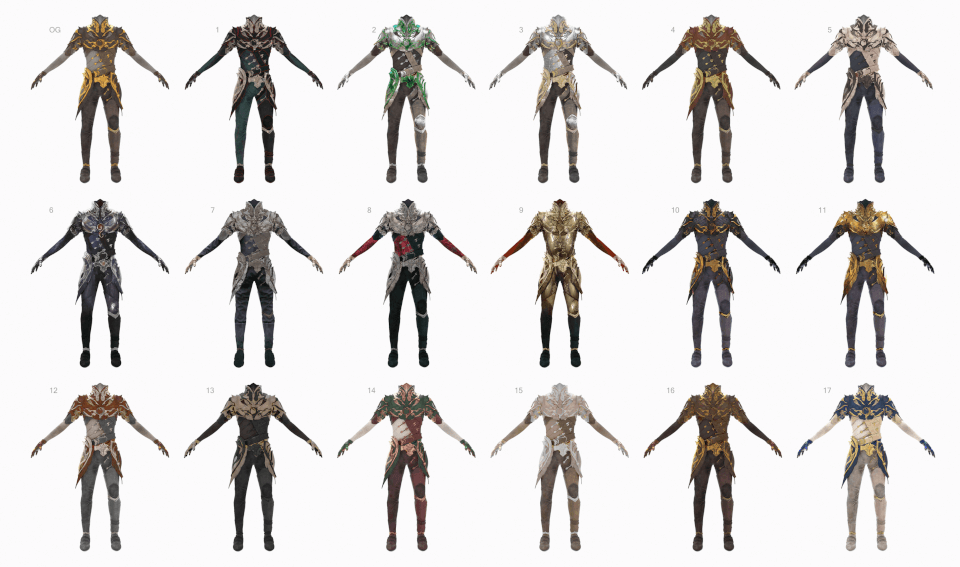