Crafting is the third branch of the Artisan System in Ashes of Creation, and is the step where processed goods are turned into finished goods.

NOTE: There is a difference between crafting a finished good (done in the Crafting Branch of the Artisan System) and a processed good (done in the Processing Branch of the Artisan System). Unless you are corrupted, you will not drop finished goods (weapons, armor, food, potions, etc) on death. Only the corrupted have a percentage chance to drop weapons, armors, and other crafted goods when they die. For more on corruption check out the corruption section on the PvP page.

Intrepid has already detailed out a robust list of crafting professions: Alchemy, Armor Smithing, Blacksmithing, Carpentry, Cooking, Jewel crafting, Scribes, Ship building, Siege weapons, Weapon Smithing. It has been noted by the community that some mainstay professions: (Tailoring, Leatherworking) are missing. As it stands right now this is probably not the full list. If Intrepid chooses to keep all of Armor making bound to one profession, or if they will separate it out, that remains to be seen.

Also, while noted on the Artisan Page it is worth mentioning again for the Crafting page, keep in mind you can no longer master everything in the Crafting tree. On 28 July 2020 Steven released a statement stating that you can master multiple, but not all, of the professions inside one of the branches.

The crafting system in Ashes of Creation is all recipe. There will be no RNG in your crafting. When you go to craft an item, you will always get the item you are expecting out of the process.

This is not to say crafting will be easy or mundane.

The first part of crafting is the acquisition of recipes. This does not happen just because you “level up” in your Artisan Profession. Some recipes will come from the natural progression of your trade, but you will also get recipes from monster drops, from completing quest lines, from being a Mayor and unlocking specific node-related recipes, from advancement in your social organization (Thieves Guild or Scholar’s Academy), from killing legendary bosses, gaining titles, having access to specific buildings on your freehold, and from your status in your religious organization. It is also possible to get recipes from reverse engineering by breaking down boss dropped items and then learning the ability to reproduce those items. 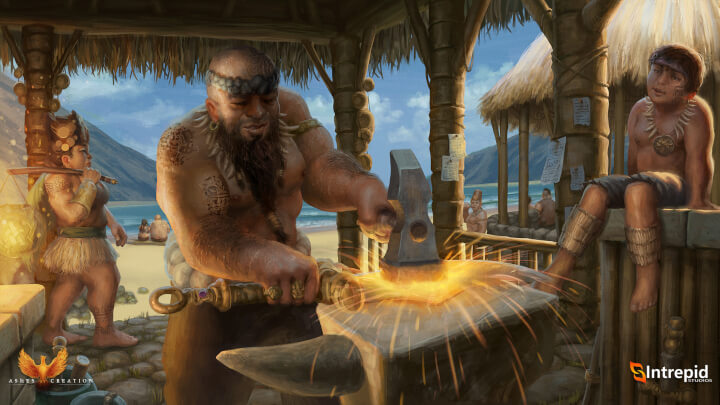 One of the ideas Intrepid has teased that may wind up in the game, is a crafting system where players have a patent on exclusive recipes discovered during crafting experimentation. The player who discovers the recipe would have the option to license out to other players for a limited time. Once that timer runs out, then the recipe would become common knowledge. This would be a result of crafting experimentation.

I mention it here so readers are aware this is something that may occur; however, this is not a promised system or something guaranteed to remain above the line.

Just because the crafting in Ashes of Creation is recipe based does not mean there is no variation from one crafter’s items to another.

Crafters will have dials so they can manipulate the stats that are on weapons and armor. These dials allow the crafter to decide skills, abilities, and stats the weapons and armor have. It will be possible to increase one stat at the expense of another. It is possible to make an item more magical or more physical. Such is the flexibility offered by the Ashes of Creation crafting system.

We know that it will be possible to obtain additional crafting dials from being high ranking in the Social Organizations. An example of this was given as a high-ranking member of the Thieves Guild would be able to add more dexterity/evasion stats on armor, even armor that would not traditionally have those types of stats. More on this when it becomes more readily available.

NOTE: As a reminder, weapons have their own skill trees.

Finally, the Crafter’s name will be embedded in the items they create.

I currently have a question pending with Steven about the processing stations for both processors and crafters trying to get some clarification.

Also, while it is possible to build crafting stations at freeholds, the top tier crafting stations will only be available inside the high-level nodes and only in nodes where the mayor has dedicated a constructible plot to certain buildings.

We have been told there will be specific gear for the gathering and crafting classes. We are waiting for more information.